Focusing on characteristics rather than breed of his latest foals has helped Adrian Coombe improve herd productivity at Dupath Farm, near Callington.

It showed a net value difference of £4.30 per lamb between progeny groups sired by the highest and lowest index rams on Mr Coombe’s farm.

The farm has 500 North Country Mules and 120 ewe lambs, as well as 180 dairy Aberdeen Angus cattle.

Livestock are raised on a rotational grazing system on 154 ha (380 acres) on the Devon-Cornwall border.

Lambs are born indoors in late February/early March and finish at pasture – at around 43kg live weight – and are sold mainly as deadweight through Dunbia.

In 2017, Mr Coombe began investigating the potential of using EBVs to select offspring to improve his breeding efficiency.

“I was dealing with EBVs and didn’t quite understand them – I was reading the AHDB manuals and just starting to explore their use,” he said.

“And then RamCompare came along, which uses EBVs as part of the system, so it seemed like a good opportunity to use high genetic value tups in our herd to find the best for us and our system.”

For Mr Coombe, the biggest benefit of using registered sires is having a clearer idea of ​​what to get from them.

“[As part of the trial] in the past we’ve had some herb-based tops here that you probably wouldn’t buy in the market.

“But they’ve come here, they’ve done really well and they’ve been near the top of the table for certain characteristics.”

As a RamCompare farm, sires are being selected for Mr Coombe, but he says he has some information. “If there is [ram] I definitely don’t want to, then I can refuse.”

The decision to reject or accept is purely based on the ram’s EBVs, he adds.

Over the past few years, Mr Coombe has tried a number of terminal mother breeds and gravitated towards Charollais.

However, this year he has seen the best results using Meatlinc mothers from breeders Clive and Jenny Richardson, who farm 250 hectares (620 acres) at Higher Denzell Farm in St Mawgan, Cornwall.

“We were introduced to the Richardsons through RamCompare – I didn’t know anything about the Meatlinc breed before,” explains Mr Coombe. “Traditionally, we were all Charolles [sired].”

With over 20 years of experience with the Meatlinc breed, the Richardsons have collected a wealth of information on their rams and sell them mainly to private customers interested in using data-backed stock.

“We started with Henry Fell, who created the Meatlin breed, in 2000. We’ve indexed and recorded everything since then,” explains Mr Richardson.

Breeding the best performing breeds comes from the gradual genetic improvement made in the breed over this period.

He has been selected mainly for growth ability and good conformation, as well as physical traits such as head and shoulder shape and lambing ease.

He explains that the results of the next generation also depend on the correct matching of rams to ewes so that they complement each other.

“With Adrian’s sheep, for example, we selected a ram with good structure and muscle to complement the Mule types.” 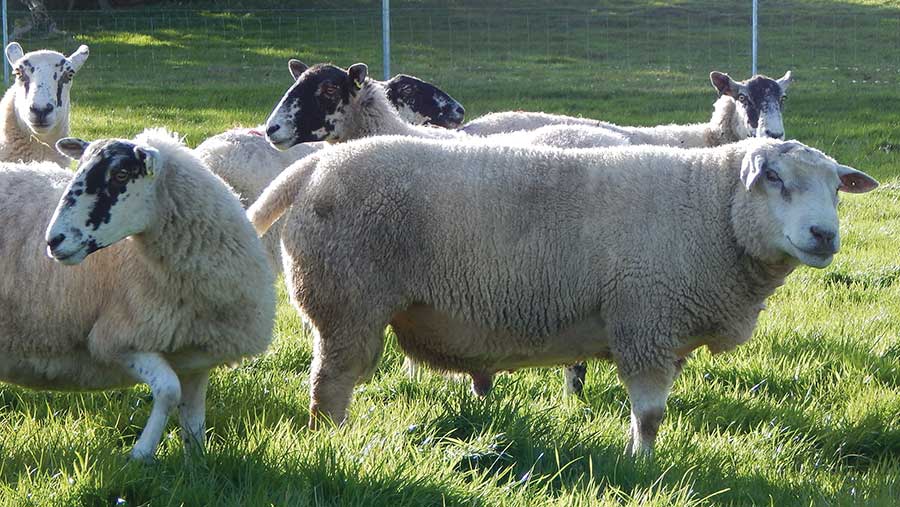 Meatlinc ram CR14561 from the Richardsons family was the top performing ram for carcase weight in 2021 with an EBV of 1.12 and an accuracy value of 91%.

On Mr Coombe’s farm, this translated into an average increase in carcase weight of 0.74kg compared to lower priced rams.

Another Meatlinc ram from Richardsons also led to an improvement in days to slaughter, with lambs sired by this ram at Dupath finishing 30 days earlier than others.

The benefits of these features can also be evaluated in financial terms.

“Last year, I bought grass for 11 manats a day. If you can finish a month early, it will make quite a bit of money.

“The sooner they finish, the more grass I have for my sheep too – which means hopefully I won’t have to top them up as much.”

In the future, Mr Coombe says, he will only use EBVs to determine which sires to use – or not.

“RamCompare opened my eyes to a lot of different breeds and now it’s not about choosing one breed in particular, it’s about choosing something that will give us the high growth rates and carcass weights we’re after.”

The goal of the project is to enable genetic improvement by incorporating commercial data into genetic evaluations.

The study sees Signet-registered rams of various terminal breeds placed on commercial farms to assess traits such as carcass weight and days to maturity.

Now in its sixth year, more than 310 rams from 11 predicted breeds have been tested.