A young farmer’s mission to raise low-yielding animals so he could manage 500 sheep and 80 cows on his own began with a generous free gift.

Carmarthenshire beef and sheep farmer Carys Jones won a free Romney ram from the Kaiapoi herd last year and has been impressed with the results so far.

He hopes the sheep system can mimic the farm’s dairy operation, which in 2015 switched dairy continental cows to Stabilizer genetics.

Miss Jones farms with her grandfather, Trevor, at Carreg cyn tóhó, near Llandeilo, on the edge of the Black Mountain. He is trying to prepare the business for the reduction of subsidies.

Miss Jones explains: “I changed the genetics of the sucklers and every cow is at least 50% Stabilizer and less productive than before.”

“What I’d like to do with the sheep is to try and breed Stabilizer sheep and lamb outdoors, which means I’ll be able to run the farm mostly on my own, apart from helping out on big yard days.”

The initiative, called the Next Generation Giveaway, was part of a pledge made by the Hodgkins in 2019 when they made a financial offer to help pay for the importation of six live rams with the Myomax muscle gene from New Zealand.

Imports received £20,000 from the Frank Parkinson Agricultural Trust and £3,000 from the Henry Plumb Foundation.

Miss Jones was one of six lucky applicants from a pool of 40 who explained why the ram was needed and what they wanted to achieve in the sheep industry.

“I was drawn to the Kaiapoi Romneys because of the amount of information behind them. They are good foragers and do well with very little input. They also have muscular genes, so they should produce a decent carcass.

“When I went to pick him up, he looked like just a grass-fed ram, but he’s grown and now he’s a big ball.”

The enterprise has common grazing rights for 600 sheep in Kara Dag. However, due to the long-term endemic sheep rustling problem in the area, the family grazes conventional animals only for short periods.

Miss Jones explains: “After the Glastir payment is on the hill next year, we will probably take the ewes as the risk of losing them is too high and there is also the risk of disease such as worm resistance.”

This means that productivity at home must be increased in order to grow the business. The flock joined the Hybu Cig Cymru (HCC) hill ram scheme to improve genetic merit after seeing a decline in breeding rates in 2018.

Miss Jones also hopes that lambing labor can be minimized, so the family dthere is no need to spend those holidays in the lamb shed.

The spectacle convinced him to buy a second coat and 100 fur sheep from Kaiapoi this year.

This allowed him to make the most of strong dogmeat prices and use flock data to cull loose ewes and problem ewes.

The ewe lambs were bred with a home-bred Charmois ram, and the ewes used Charolette terminal breeds.

The farm has been breeding and selling its own registered rams through Prohill, managed through HCC since 2018.

“There are 183 rams in this year’s Prohill sale and it should be possible to select better rams from this breeding group. The information is there and the rams are not forced, so they should be functional.”

Rams will continue to run two rounds with the ram from April 1, but outdoors. Miss Jones says outdoor lambing must save a lot of hay and labour.

The goal will be to create enough grass cover by budgeting for fall and winter with the help of a fortnightly plate counter.

Romney-, Prohill Welsh Mountain- and Primera-cross lambs should preferably be lambed outside and checked twice a day.

The success with the cattle inspired Miss Jones to consider the sheep system.

The herd went from calving most of the year to calving at 12 weeks and 95-100% breeding due to good fertility, easy calving, low mortality and few twins per year.

Previously, the cows were English Blue and Limousin cross cows from dairy herds and needed lots of concentrates and assistance during calving.

Birth weights from the stabilizers averaged 36kg this spring and a yearling heifer wintering in the silo outside and a small amount of nuts grown have saved feed costs. Adult cows now winter only on grass. 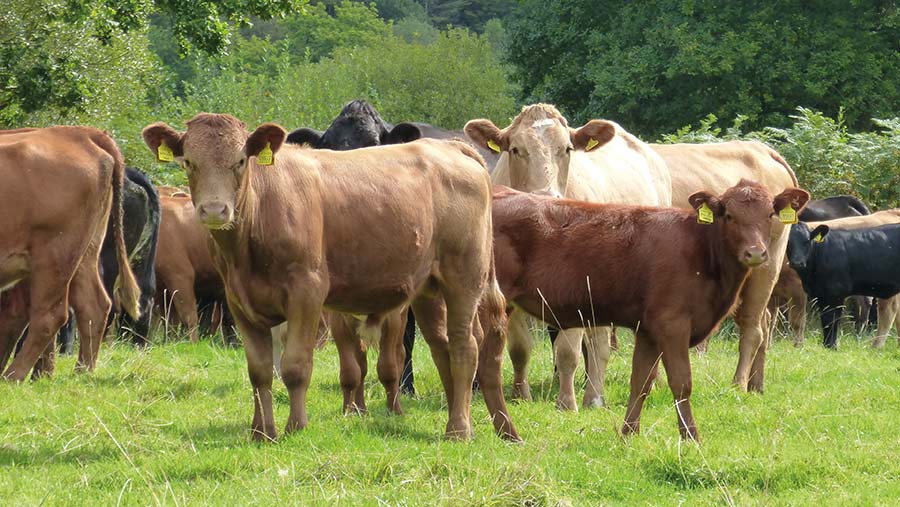 “If I’m going to be farming mostly by myself, I don’t want to do hard, laborious work like pulling calves. It has been eliminated in cows, so I hope so [pulling lambs] it can also be found in sheep.

“Only one cow needs help calving this spring, an old continental cow.”

High rainfall on the farm (typically 1.6 m/year) means overwintering in soil – peat over clay in areas – can lead to heavy poaching.

To accommodate the expansion, a new slurry barn will be built on the farm to hold another 10-15 cows.

A layered floor and roof will be installed on top of the statue, which will allow the farm to house 500 cows as well as 500 sheep.