In this week’s sheep segment, This is Farming Cho. The Limerick-based breeder talks to Texel and Suffolk breeder Robert Walker. We discuss building his herd from scratch, the successes and failures of his breeding facility, and the future for the breeder.

Robert Walker, from Limerick, is a third-generation farmer on the family farm his grandfather bought.

Originally a dairy and calf farmer, Robert’s father entered the Suffolk livestock scene in 1990. Following this, Robert and his brother James established a herd of purebred Texels.

Looking back, Robert recalls his first farming memories: “I’ll always remember lambing my first sheep.”
“When I was a baby, my mother and father would bring me to the lamb shed, and I would sit in the haystack.”

“I think I grew up in the middle of it. I think that’s where my interest came from,” he says This is Farming.

A pedigree sheep farmer balances a busy life at a mixed-use facility in Croom. In addition to managing breeding herds, Robert works as an artificial intelligence technician with Munster Bovine at the start of the year. This followed genetics studies at UCC, where he completed his Green Certificate.

The farm is run as a family farm by Robert’s parents, himself and his brother James, who works as a vet in Abbeyfield.

The Kilcurley Flock consists of both breeds, Suffolks and Texels, and the farm is run by two separate businesses operating on two separate blocks.

The dairy farm consists of 160 head of cattle and a breeding herd of 110 Suffolks and 70 Texels.

The farm around their home is mainly dairy, with sheep farms operating outside.

“The Suffolks have been here since my father started his first flock. I believe that the breed has improved a lot in recent years. Their ideal characteristics for me are their fast growing characteristics, as well as improved strength at birth.”

“Also, the Texel breed has always been strong at birth. They are very purebred and develop well from birth.”

“Texels were presented by buying several sheep from reputable breeders. We are always on the lookout for better sheep and plan to buy a sheep or two each year. By introducing new bloodlines, we welcome more repeat customers.”

“For Texels, we aim to get as good a ram as possible.”

Management of the lambing season

With their Texel enterprise, Robert and James do some roasting with their top quality sheep. Next year they plan to introduce this breeding program to the Suffolk herd.

“On average, our scan rates are about 2.0 for Suffolks and about 1.7 for Texels.”

“Suffolks lamb from January 5thc-10c. We are aiming to have most of the Suffolks done lambing and then continue with the Texels lambing which will take place from the 7th of February.c forward.”

All lambing is done indoors for the Kilcurley Flock and next year the brothers plan to introduce cameras in the sheep shed.

However, to ensure that someone is on hand at all times, they organize queues for the lamb stall.

“With our Texel herd being 100% AI, it’s a pretty compact cycle. We take turns with the lambs, we always have someone available.”

After spending years building up a reputable name in the Texel and Suffolk breeding circles, Robert is taking part in the first sales across the country.

In addition, it has built a loyal customer base that includes a number of returning customers.

“Our Suffolks are sold in supermarkets across the country. We also have 50 half-breed sheep, which give lamb to either butchers or factories.”

“We intend to sell our 85 kg ram lambs. We try to breed sheep with the right size and height.”

“Furthermore, we focus primarily on the commercial manufacturer, both in terms of size and capacity. We love a lamb that can move with a little more class and hold its own. It also involves paying attention to basics such as feet, good topline and carcass quality.

The third generation farmer has also been successful in the show ring. Exhibiting at both Clonmel Shows this year, the Walker family won second place with a hogget ewe that sold for €6,500.

In addition, they previously won overall male and supreme champion at Blessington, which has been a huge highlight for the breed so far. This ram lamb was later sold for 10,000 euros.

“For me, the best part of farming comes from my love for sheep. I enjoy seeing the generation go well for others.”

“Also, it’s nice to work closely with your family, and it’s great that we all have something in common.”

“Similarly, the price of everything is difficult for many farmers this year. It is also difficult to understand that not every lamb born will be a superstar.”

“But when you hit a tough year, it’s important to remember that there’s always next year.”

“I think the hardest time of the year is the birth of the lambs and tracking the losses. I manage it by organizing help and making sure everything is in order, everything that is sick is taken care of. It is important for sheep to have the right mindset.” 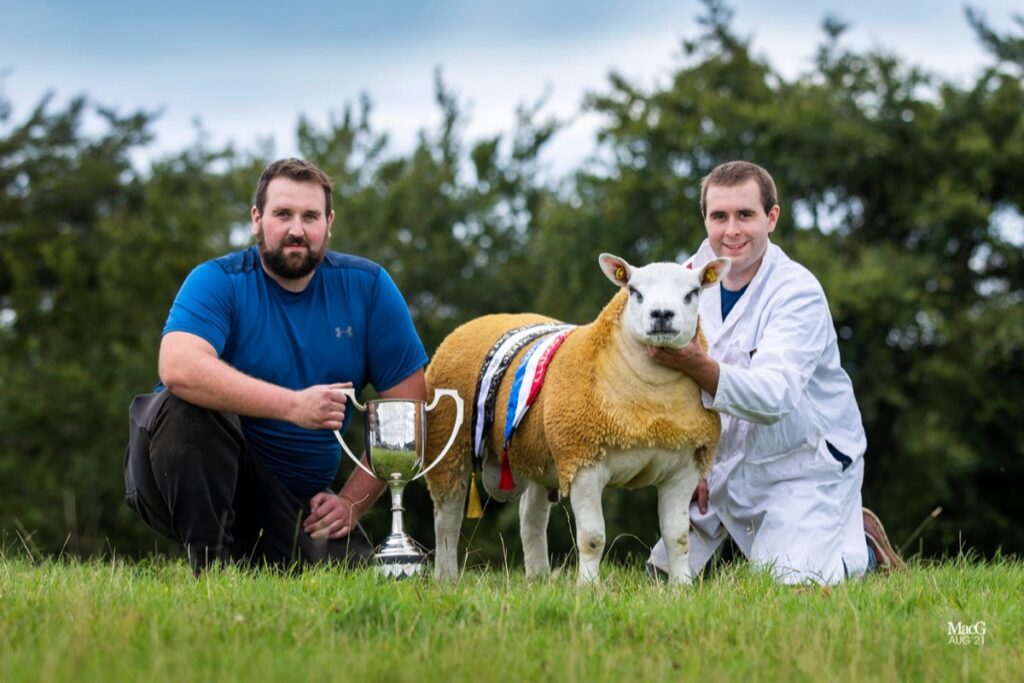 Future of Kilcurley Suffolks and Texels

Robert, who has been invited to judge at this year’s main Texel sale, believes that sheep farming is like any other farming enterprise and, if managed correctly, is a profitable business.

I suggest any new breeders build their flock slowly. Very few people become top breeders overnight. Whatever you want to grow, grow it, hopefully one day you will grow the right one.”

“We always want to change the bloodline and introduce some nice ewes this year if we can. We have also been invited to the All-Star Texel In-lamb sale at Blessington where we will be showing some in-lamb pig ewes.”

“We have no expansion plans. We would like to continue what we are doing and stay at our current production level.”